These children are the first in our class to get their orange behaviour badges! What an achievement! 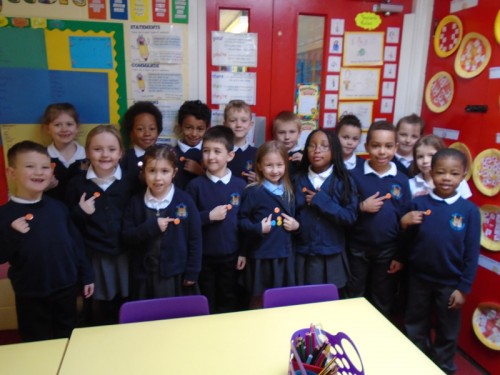 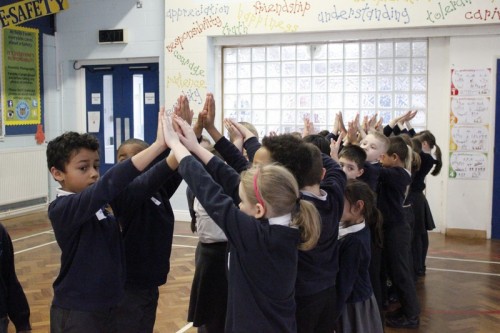 This afternoon Year 2 had a very exciting experience. Dawn from Freshwater Theatre Group came to work with us about our History topic of the Great Fire of London. First she told us some facts about the fire and then we played a game. We had to follow instructions to make different shapes relating to the fire. We then got into two lines to become the houses on the streets of London. We learnt they were all very close together and that was one of the reasons why the fire spread so quickly.

The fire started with one small spark in a bakery on Pudding Lane and was soon spreading all over London. Sean acted as Samuel Pepys and Sophie was his maid. She woke him up to tell him all about the fire and he was shocked! Then some other children joined in with the Drama and acted out what might have happened when the fire started. 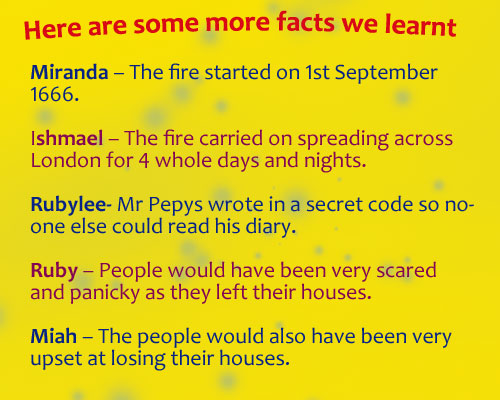 Toucans have been enjoying learning some poetry in English this week. We are exploring ways of using our voices so people enjoy what we are reading. We have been focusing on trying to:

• Read loudly and clearly.
• Use expression and intonation.
• Learn the poem off by heart.

Have a look at our videos to find out how well we did! 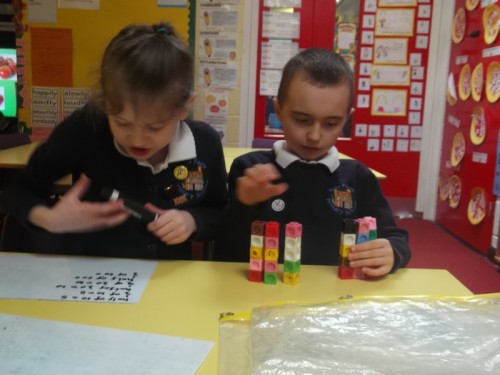 This week in Maths we are learning all about fractions. Today we started by thinking about what is a whole and what is a half. We had some very clever ideas and Mrs Butterworth (who taught us today) was very impressed. We had a look at some pictures in our groups and had to decide whether each could be measured and cut, counted and shared or something else to find half. We thought about a bottle of pop. Lucas measured the picture and said we could split it because it measured 8cm. He then said he thought that was a good idea for the picture but you couldn’t do that in real life. He suggested with a real bottle of pop you would have to measure how many litres was inside it and then find half of that number. Well done Lucas!

We then did some activities to practise finding half. Some of us used multilink to find half of 10, 20 and 30. Ask us how we did it and what we found out.

At the end of the lesson Pyper told us she had learnt that an odd number couldn’t be shared with a whole number; you would have to use a fraction because there would always be one left over. We really worked hard today. 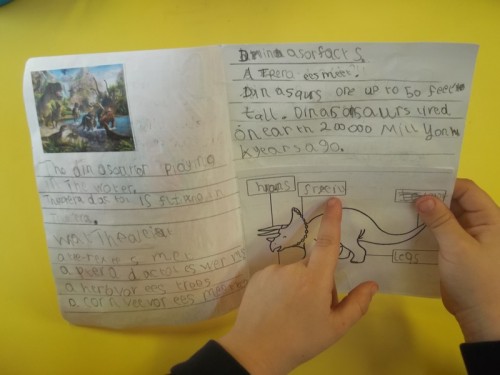 Today we finished writing up our own non-chronological reports ready to make a class book about Polar Regions. We used the magic pencils to help us to do our very neatest handwriting. Once we finished we had some time with Puffins class to share our learning. Puffins have been writing leaflets about dinosaurs so we each took turns to share our reports. Toucans really enjoyed reading the dinosaur facts and Puffins learnt a lot about the North and South Poles. Well done everyone! 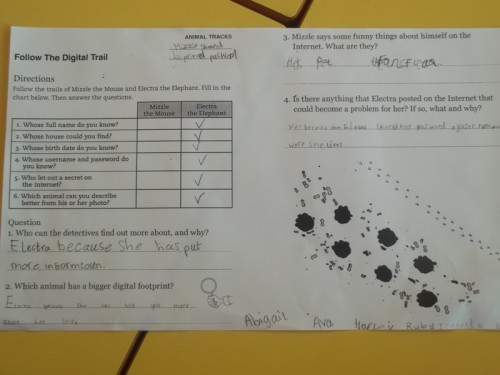 Today is Safer Internet Day. we had a very informative assembly from Mr Baddhan to start our day and then continued our learning in class.

Our lesson was all about digital footprints. We learnt that everywhere you go on the internet you leave a digital footprint. This is the reason why you shouldn’t share too much information about yourself online. We looked at some information two characters (Mizzle and Electra) had left online and became detectives. We decided they really should have spoken to their parents before they went online because Electra had put a lot of his private information online. Electra had put his full name, real address and date of birth whereas Mizzle only put a nickname, area and no other details. We decided Mizzle was safer than Electra.

We then came back together to share ideas about which information we should and shouldn’t share on the internet. Have a look at our work to see what we came up with. 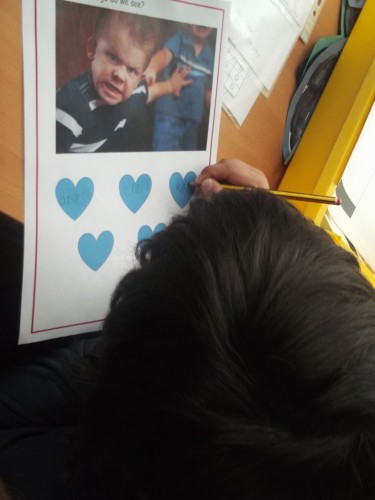 Today in our Peacemakers lesson we focused on feelings. We looked at some clips from the film Inside Out and used this to start thinking about all the different feelings we have. We then tried to think of times we had felt those feelings and deciding a lot of the time we feel more than one thing at the same time.

We then worked with a partner to do an activity. We had some photographs to look at and had to decide what the children might be feeling. We had to think of five different words. We shared our ideas then started to think about why they might have felt that way. Phil challenged us to not use the basic 6 feeling words from now on. We have some word banks in our classroom to help us to choose and use different words. 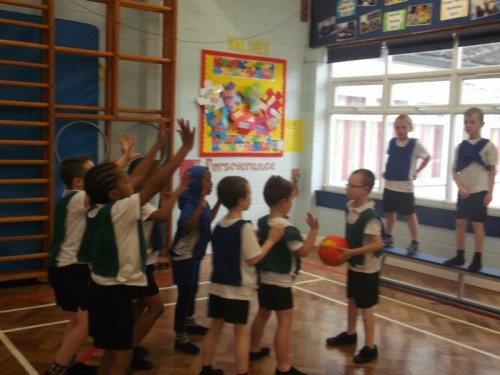 Today we practised all the skills we have been learning to play a game of Benchball. We split into four teams and played two teams against each other. Miss Williams refereed one game and Sean then Miranda refereed the other game.

This is what we have learnt about in PE to help us to play the game well: 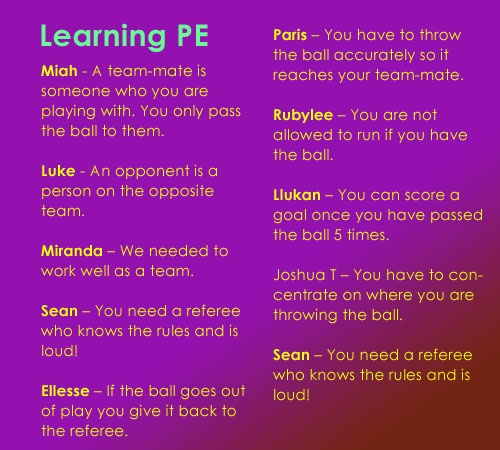 We had great fun and were very sporting by clapping the winners and not moaning if we didn’t win! Miss Williams was particularly impressed with how well we all joined in and wanted to do our very best. 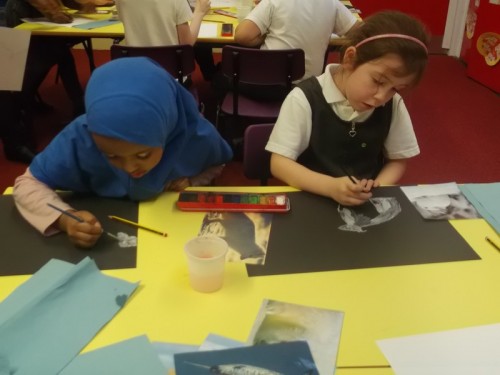 We had a lovely arty afternoon today! We used all the skills we have been learning in our Art lessons this half term to draw and paint polar animals.

We practised:
– Drawing the right shapes. Some of us chose to use A3 paper so this was even harder!
– Choosing thick and thin brushes and using them with long, smooth brush strokes.
– Mixing our own colours.
– Adding detail and texture using the brushes to make lines and dots.

We have all tried our very best and produced some fantastic work. Please come into our classroom to see how wonderful it looks! 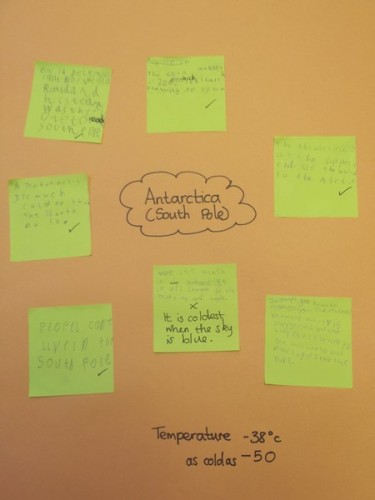 Today we started to plan our reports. We worked as a whole class to decide what sub-headings we will use. We then worked in groups to record some facts about each sub-heading. We used research we had done earlier in the week to help us. We have watched Frozen Planet, used books and the internet to find out facts. We put these facts onto the right mindmap to help us to plan for our reports. We then went through each mindmap as a class to check they only had true facts on them as this is very important for reports.

We are looking forward to starting to write our reports tomorrow. We really have learnt such a great deal!