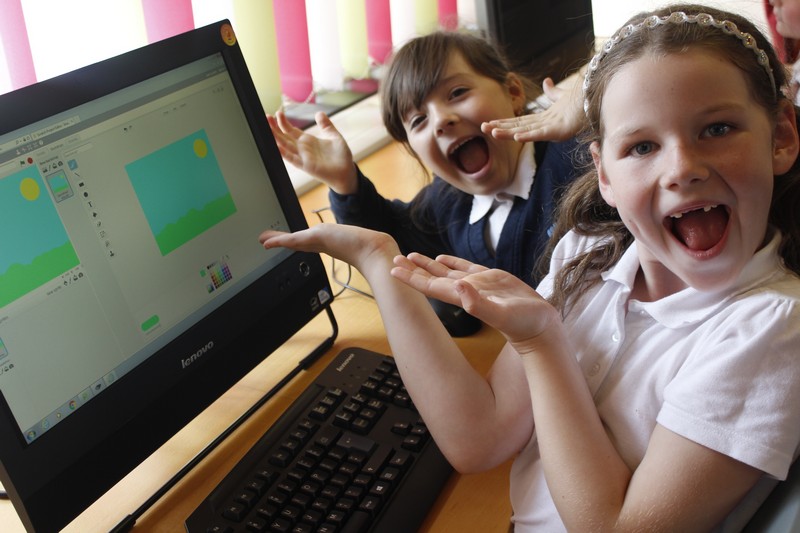 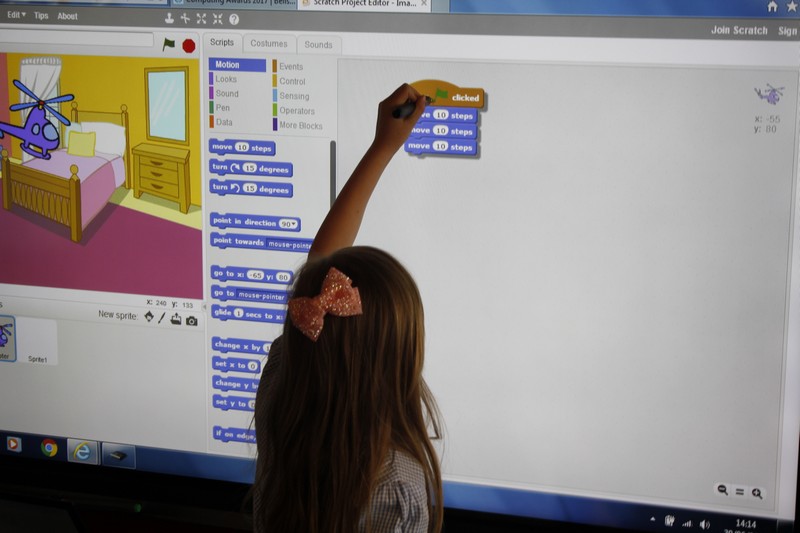 During Computing today, Year 2 Toucans were introduced to Scratch by Mr Baddhan. The children tried some of the motion blocks and the events blocks. They worked out that if the blocks are snapped in properly, then the program will not run. And everything must be in order otherwise the program will not work correctly. Alot of understanding on algorithms, debugging and sequence were shown by Toucans.

Toucans also learned how the sprite and backdrops can be changed too.

Remember, Scratch is a free program and can be accessed by clicking on this link https://scratch.mit.edu/ 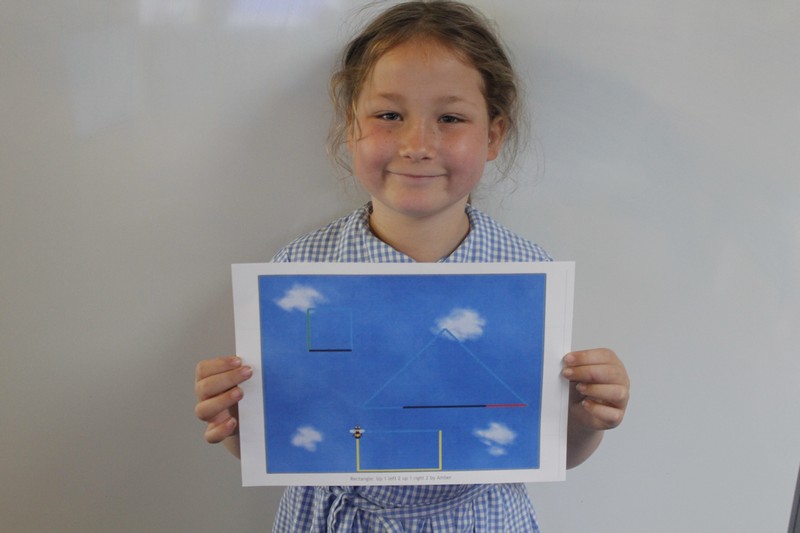 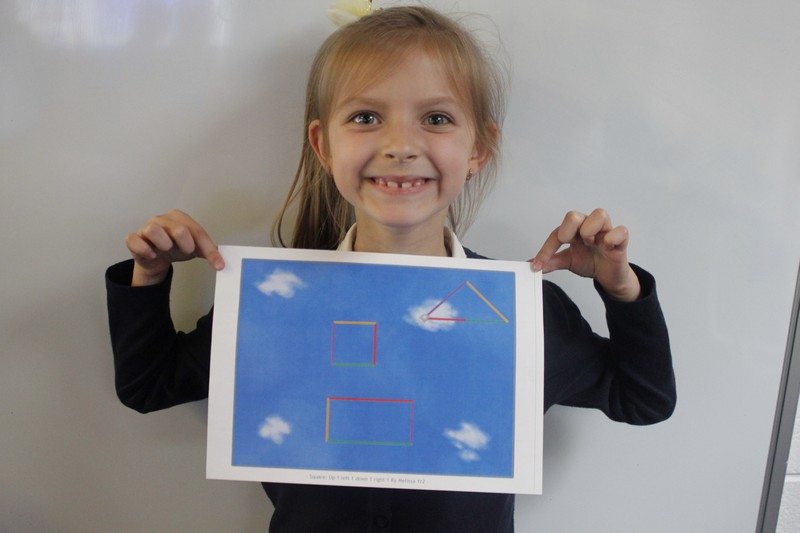 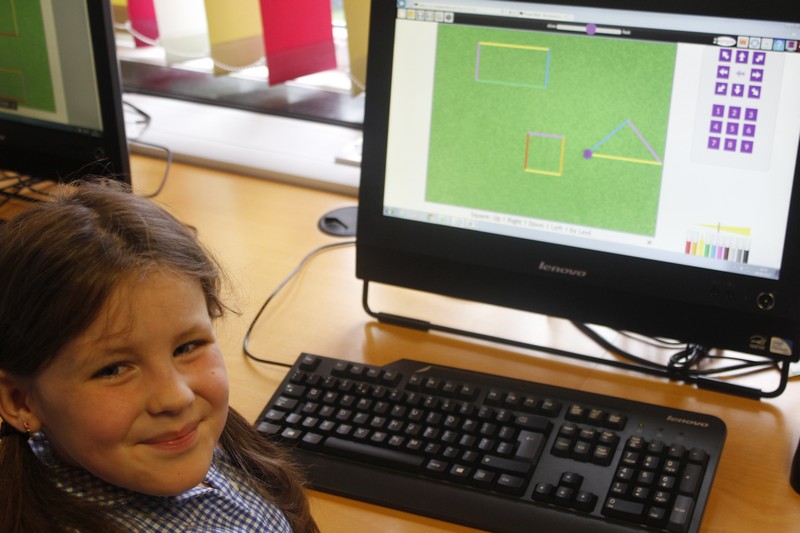 They were challenged to create three shapes, square, rectangle and a triangle, using different line colours. They used many right-angles for the square and rectangles.

Some of the children even managed to start drawing lines to write their names using many right angles.

Toucans already know that a right angle is an angle of 90°, as in a corner of a square.

What a wonderful day we had at Twycross zoo! Luckily the rain held off (with just one short shower) and everyone really enjoyed themselves.

We started the day by visiting all the different monkeys. We went to see the spider monkeys and the lady from the zoo told us some very interesting facts about them. We were also able to answer some of her questions as we have learnt about them as part of our rainforest topic. It was very exciting to watch them swinging about and we thought the baby was very cute!

Miss Williams (who has visited the zoo lots of times!) was very excited to see that the Amur leopards were right by the windows! She had never seen them before as they were usually hiding at the back of their enclosure. We watched them play fighting with each other and they were fascinating to watch. Next we went to see the meerkats and penguins. We decided they were both very nosy animals as they just stood on lookout the whole time we were there! Then we went to visit the tapirs. Unfortunately they were inside having a snooze instead of roaming around so we couldn’t see them walking but this did mean that we were able to see them very close up. We were shocked at how enormous they were! We thought they looked a bit like very large pigs!

We also saw the orang-utans, lorikeets, butterflies and pets before we had a lovely picnic lunch together. After lunch we went to play in the park and had such a great time! There was lots of different equipment, even the teachers had fun!

We started our afternoon by going to the discovery centre where Bethan taught us a wonderful lesson about animal habitats and adaptation. She was very impressed with how much we knew and how well behaved we were. Our teachers were very proud! We got to meet Alan the giant cockroach and Eddy the bearded-dragon. Bethan gave us some very interesting facts about them and then we were allowed to stroke them if we wanted to. Most of us were very brave at stroked at least one of them.

In the afternoon our favourite animals were the elephants and giraffes. We had spent all day looking forward to seeing them! The giraffes were much taller than we had expected them to be! Then we went hunting for Ganesh and had a photo in our groups. We also saw: lemurs, flamingos, tortoises, a boa constrictor, peacock, zebras, parrots, owls, cranes, marmosets, capybaras and many more!

Overall we had such an amazing day. Our teachers were extremely proud of how well-behaved we were all day and how much we had learnt. Well done Toucans! 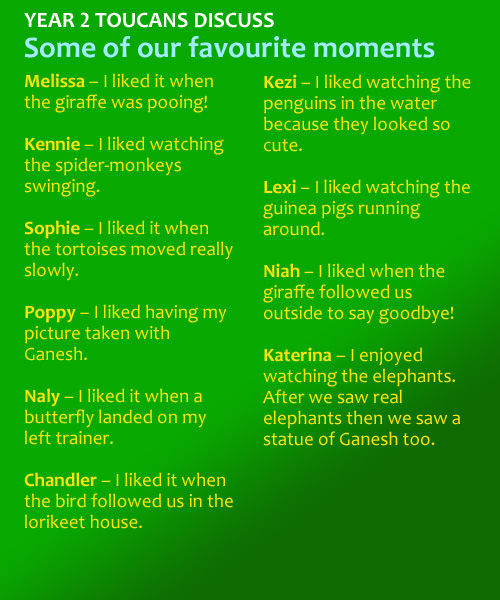 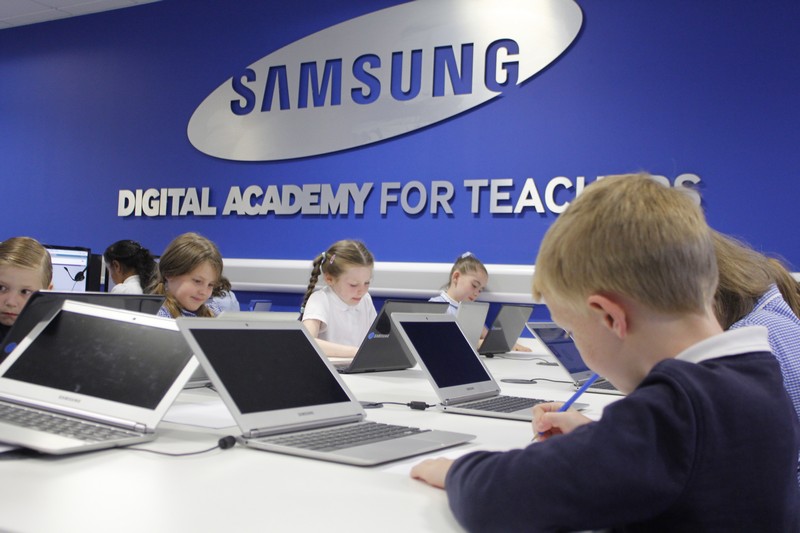 This afternoon Toucans visited Harborne Academy. We had a wonderful time and learnt a lot about coding. 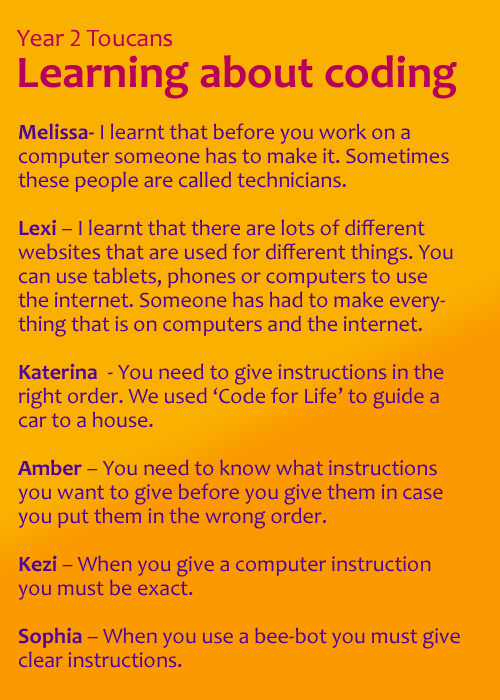 The children were very well behaved. The teacher from Harborne Academy was very impressed and even the mini-bus drivers commented on how lovely the children’s manners were. Well done Toucans!

What a wonderful week! Toucans have been super-busy this week trying out lots of different Art techniques and making creative and imaginative pieces of work.

Today we evaluated our work and picked out our best pieces. 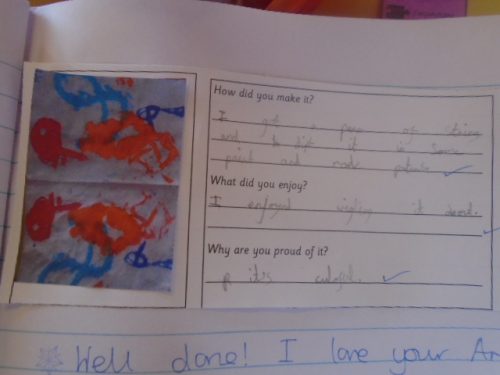 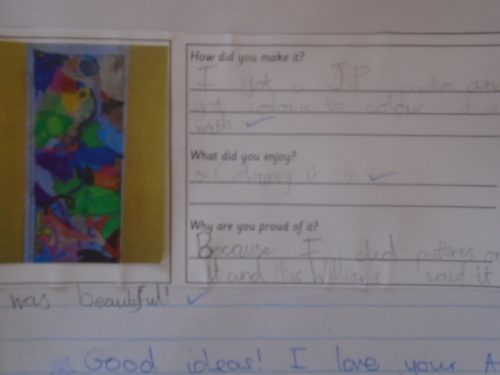 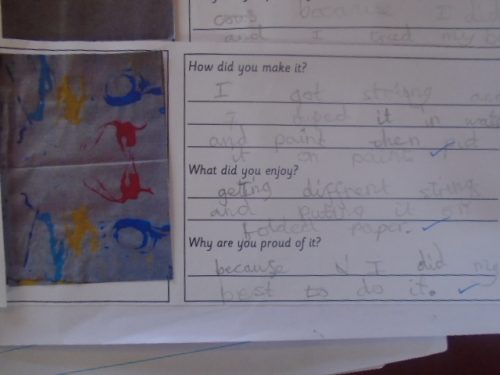 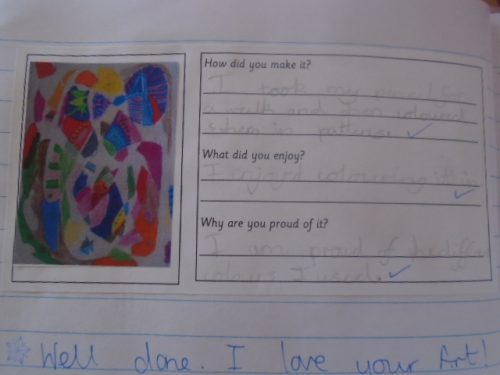 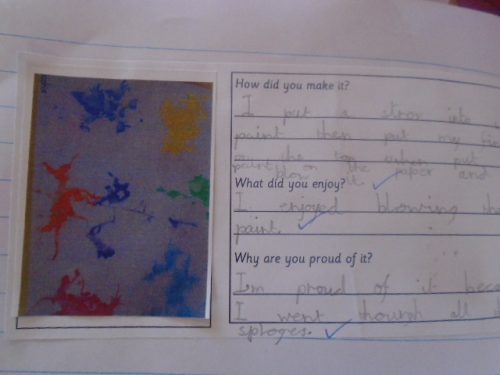 The children learned about two key tools to use, the wand tool (a selection tool) and the paint bucket (a fill tool). They selected black areas of the original image and then filled these with different colours.

This is the original Jackson Pollock image.

Here are some examples of Toucans manipulating the above image. 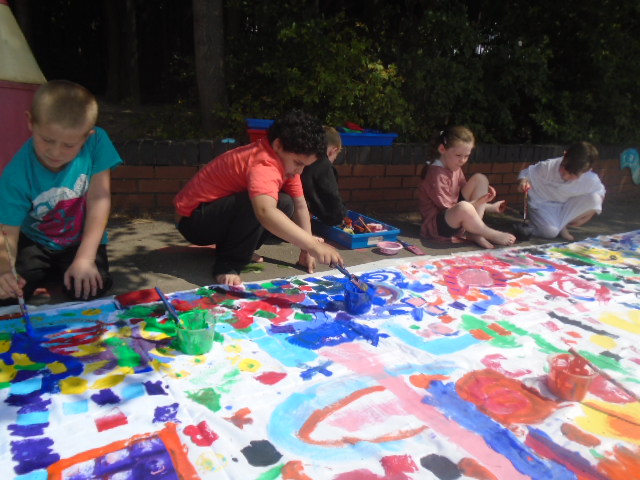 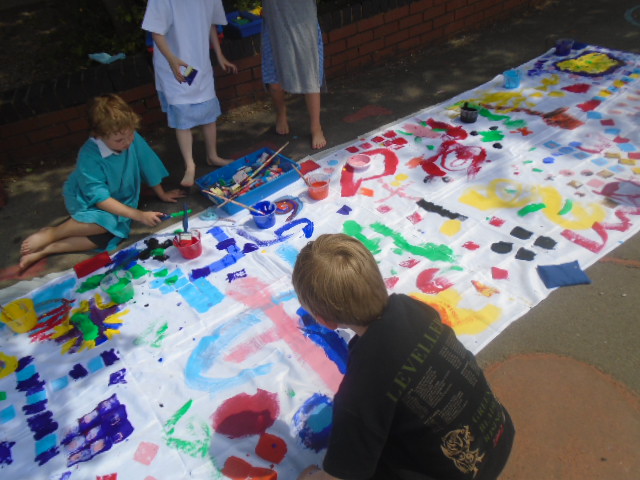 Today was supposed to be our trip to Twycross Zoo but disaster struck! The coach never arrived and we were unable to get a replacement in time. We were all a little disappointed but the good news is that we have re-booked it all for next Tuesday instead.

We then spent our day having lots of treats and by the end of the day we were quite pleased we still have the zoo to look forward to! Mrs Scott bought us all a tip-top – thank you! We watched some Scaredy Squirrel (which is our next Talk for Writing story) and then spent the rest of the day doing Art.

We continued with our large mural in the style of Jackson Pollock. Today we used lots of different (REALLY fun!) techniques to layer just as he did. We splatted and squirted and printed and splattered! It was such fun! It was a very good job we had our Art aprons though as we ended up splatting more than the mural at times! Have a look at our photos to see us enjoying ourselves.

We also did marble painting today. We put marbles into paint and then rolled them in a box onto some paper. The effect is amazing!

We then started clay tiles. Miss Williams said we could do whatever we wanted to on it! We really had to use our imagination to stick and carve patterns.

So what started as a disappointing day ended as an amazing day! We are really looking forward to our Art exhibition on Friday. Please do come and see all our wonderful work.

This morning we launched our special Arts week. We are studying ‘Mural’ by Jackson Pollock.

We looked at it together and shared our first impressions:

We also listened to a piece of Music called ‘Music for Jackson Pollock’. This is what we thought:

Sophie – I didn’t like it to start with because it was a bit boring but as more sounds started in the middle part I started to enjoy it.
Ruby – I heard some crunchy sounds. I thought it was quite relaxing.
Elliott – I thought it was quite funny because it was strange. I’ve never heard a piece of Music like it before.
Yusif – I thought it sounded like birds.
Rubi – I closed my eyes and I could imagine birds hopping in a happy family nest.
Poppy – I didn’t like the beginning because it reminded me of thunder.

We then experimented with our own Jackson Pollock style art. We took our pencil for a walk! Jackson Pollock listened to Jazz Music while he worked so we did the same while we walked our pencil. Once we had lots of different shapes we used different media to colour them in using patterns. We used felt tips, wax crayons, pencil crayons, oil pastels and chalk pastels. Here are some photos of how we are getting on. Check back later for final pieces. 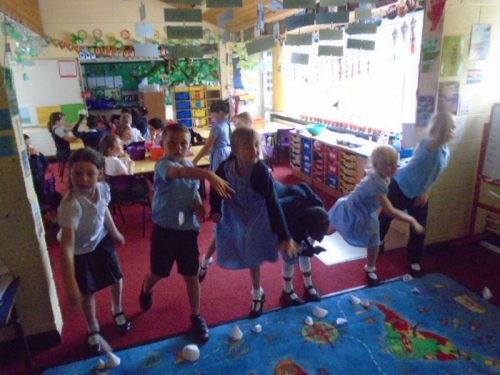 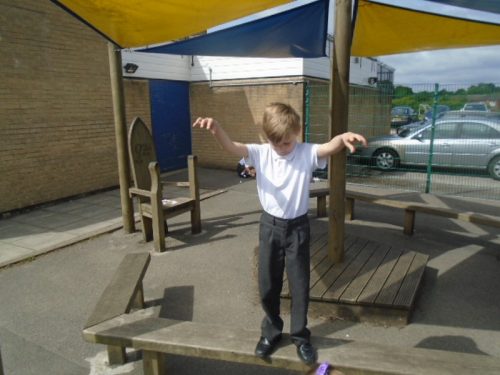 Today in Science we experimented with forces. We talked about what makes things move and linked it to pushes and pulls. Miss Williams showed us how to make a flying fish and then we made three of our own of all different sizes.

We took them outside to experiment with. We had to find the answers to these three questions:

We worked in pairs so we could share our ideas with a partner.

To find the answer to the first question we worked with a partner so we could drop them altogether. We dropped them at the same time and from the same height to make sure it was a fair test. We thought the smallest fish would be fastest because it was the lightest. We found out that they all dropped at the same speed. It didn’t matter whether the fish was big or small they fell together.

We then experimented with making it go faster and further. We tried to use the biggest force possible to win a class race!

We have took our fish home to experiment with them more.

In our English lessons this week we have been learning all about dictionaries. First we focused on how they help us to spell words accurately and then we focused on using them to find out what different words mean. We had a fun challenge where Miss Wlliams gave us a word and we had to find it as quickly as we could!

On Thursday, we put all that learning to use and made a class rainforest themed dictionary. We wrote our definitions in our books, edited them and then published them. We worked as a class to put our words into alphabetical order and ended up with a fantastic dictionary! We are putting it in our book corner with the other books we have made this year. 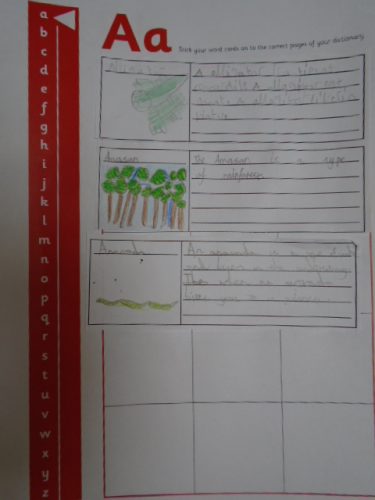 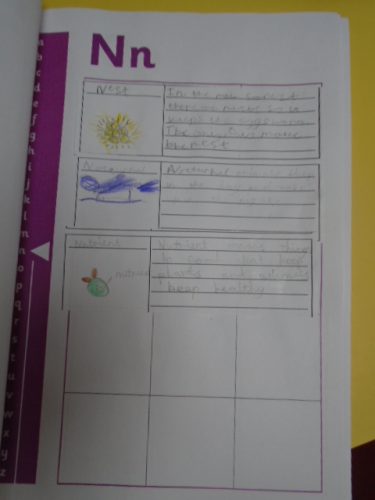 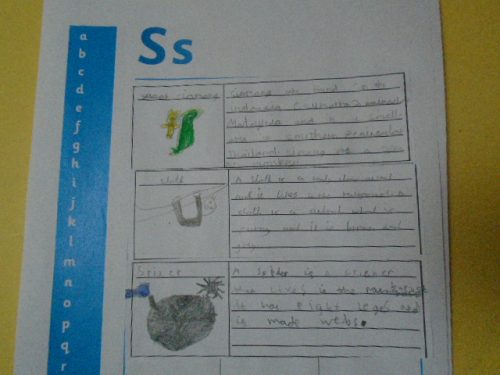