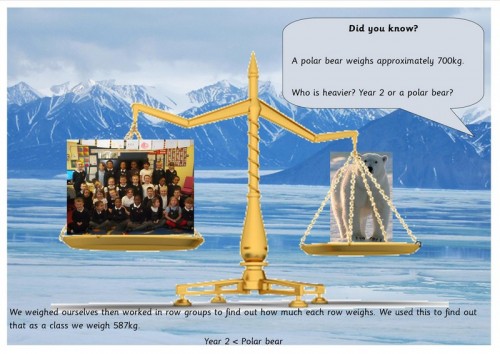 Today Miss Williams told us that a male polar bear can weigh up to 700kg. We found it hard to imagine what this meant so Miss Williams challenged us to solve this problem:

Who weighs more: Year 2 or a polar bear?

About half of us predicted it would be Year 2 and the other half predicted it would be a polar bear. We had to think of how to go about solving the problem. We shared lots of different ideas but decided Ruby had the easiest idea. She said we could work out how much each row weighs first as it is easier to add 6 numbers together than 30. What a great idea! So we each stood on the scales to find out how much we weighed then worked as a group to find our row total. We then worked as a class to find that we weighed 587kg altogether. Therefore we weigh less than a polar bear. Sean suggested with Miss Williams and Mrs Green we might weigh more than a polar bear. We will let you know!

1 thought on “Who weighs more?”

This site uses Akismet to reduce spam. Learn how your comment data is processed.